For over a year now, this thing has been gnawing at the back of my mind, ever since I read this article about the components that make a startup ecosystem work.

I'm of the opinion that as more people are embracing the "startup" culture, there's a need for some mechanism that makes it possible for investors to get their money out at a reasonable profit without negatively impacting the business (which would happen if they exit in a later round - potential new investors would ask the team why current investors are not participating in the new round. Red flag). 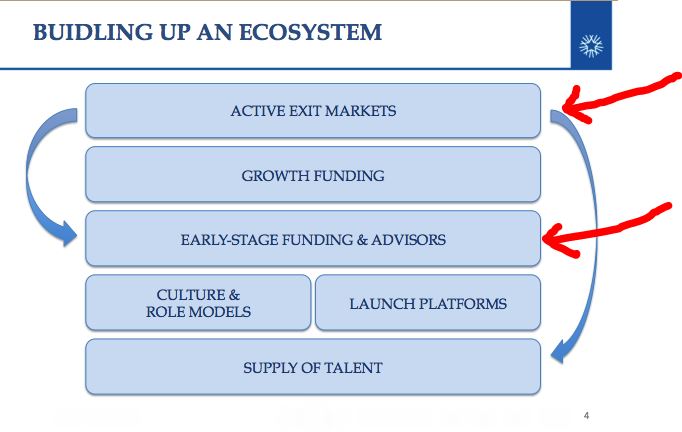 In this piece I suggest some form of internet based stock exchange. I put forward that if such a mechanism exists, more people will experiment with this investing game, there'd be more (practical) capital flow for the startups themselves and there'd be a "reality checker" on the bogus valuations some of these not-yet-profitable companies bandy around these days in the private markets.

What exactly is the problem?

Meanwhile, Kola has his savings in a risky stock portfolio or mutual fund that returns less than 15% per year.

So, the problem is: potential early stage investors need to have a reliable way of getting their capital + profit out in good enough time and startups need to be able to raise money from alternate sources while pursuing the venture funds (especially since many of these startups are too small for P.E. firms).

Imagine an online "stock exchange" where startups can list a percentage of their company equity for small time investors to speculate on based on the startup's performance against the metrics unique to that startup.

By the way, this idea is not really new, there's Startup.sx, AltX and the US just approved guidelines for equity-based crowdfunding. An analysis of expectations from the US market can be seen here. There's even a flavour of it in Nigeria as NASD.

Startup performance validated by actual investor confidence levels (based on actual growth vs plans) is a better checker of what a new growing venture is really worth than the comparables numbers being put forward by the startups themselves based on venture funding of startups like them.

How will it work?

Let's imagine that StartupX needs NGN50M to make it through the next 18 months and hopefully turn a profit. We are talking about a small tech startup for now, not one of the "big guys" with big offices who plan to become the Nigerian Facebook or the next mega brand. We'd come back to how this can work for those guys.

Let's also imagine an investment club of say 15,000 middle class hardworking young professionals who consistently save 50k looking to dabble in high-growth, high-risk tech startup investments, but has no time to do due dilligence + post-deal monitoring. Plus, they have assumed this type of financial market is for Venture and PE firms. Above their pay grade.

So, at "iPO" (internet public offering - hehe), StartupX sets it's valuation at say NGN150M, prepares the relevant documentation that backs the valuation, describes its business and future plans/expectations for potential investors. The company goes on a roadshow to the members of the investment club, marketing their public offering. Members of the club all take small pieces of StartupX amounting to 30% at a total fee of NGN50M that the company needs.

Every month, StartupX circulates flash reports showing status vs plans, market changes, progress, etc. They'd also present an updated strategy and business model if any. Investors then look at the growth curve, decide if they want to keep their holdings in StartupX or not. If they'd rather sell, they put their equity holdings on offer at a price they think is fair (hopefully, higher than what they bought at).

Now, because it's likely that more than one shareholder is putting her holdings on the market, there'd be various prices for the same stock and this gives an idea of average price per share for StartupX from a seller's perspective. Investors who want to get into StartupX also post bid prices for current holders to respond to. Extrapolate all of this up for what StartupX is percieved to be worth by the "market of REAL people". Also, the attractiveness of a startup is reflected by how "hot" its stock is. i.e the demand for it's stock.

Note that, all the shareholders are trading amongst themselves on the 30% available on the market. If StartupX is making significant progress and needs to raise more money to scale up, they can either list more shares (controlled by the exchange to avoid dumping) or take their exchange track record to approach a proper Venture fund or bank.

Imagine an exchange listing 200 startups on opening day, who all iPOed to raise 15M. It'd need just 15,000 investors in the club who contribute NGN50k per month to take the exchange to NGN3Bn capitalisation. Investors then continue to trade around this cap. Imagine if there's a significant velocity of trade and the exchange has fees per trade. Kaching!

What are the stumblig blocks?

I'm not sure it's legal to trade in equity without approval from SEC (or whom?). The enabling laws don't permit for that. Also, how often will you go to the CAC to update Form 2?

I am no finance or legal expert, but my suggested workaround for this is to register a cooperative society (the laws I hear are less strict for those), members contribute to this cooperative and hold a stake in the cooperative's fund. I used to belong to such a cooperative when I was at Celtel. So did my parents in University of IIorin. Very effective vehicle for group investments that would otherwise have been out of reach of the individual members.

The cooperative is the one that invests as an entity in the startups. So, on iPO day, if a listing is successful (fully subscribed), 30% of StartupX is allocated to the cooperative running the exchange and Form 2 is updated once. The Cooperative society then updates its own internal allocation table based on amounts committed to various startups by it's members. Of course, it's not that simple, but that's the rough principle.

How do you acquire and educate 15,000 regular folk to invest 50k of their hard earned money every month in some online thing? How do you make sure they are making well informed investment choices so the market doesn't crash and weaken future investor confidence? My proposal is to seed such an exchange with few companies and well grounded early investors. People that know whatsup on both sides. Then have continous education campaigns for both sides of the market.

One problem many startups have is that they don't keep records. No bookeeping, no eye on key numbers, inadaquate corporate governance structures and whatnot. The exchange has to take the responsibility for providing mentorship, guidance etc. to the startups. At times, the Exchange can enforce rules and change startup leadership if needed. Something like that.

This is probably the easiest part. There was an interesting suggestion to tokenize company stock in Blockchain and investors can then exchange freely and securely. To be honest, I don't fully understand it, but it sounds like a genius tinz. I like it!

What are the arguments against so far?

Argument: What startups need in Nigeria is "value investors" not speculators.

Rebuttal: I disagree. The startups in Nigeria are in need of dire growth capital and only so many would get the foreign $$. Should the rest lay down and die? Also, the estimation of value attributed to all the ones trying to raise money now is quite out of sync with reality. There's the need for a system to check that.

Rebuttal: It probably is. But as is well known, there are always gaps and points of ambiguity in law that can be exploited. Or, any of the current stock brokers and traders can just champion the creation of enabling laws.

Argument: It's a ponzi scheme. Value is not being created.

Rebuttal: No, it's not. if a startup grows from 10 pageviews to 100 pageviews, value has been created. What that value then means in $$, is up to the investor. And one investor's aggressive apetite will be checked by the other one's pessimism.

Okay, so what next?

I guess you can give it some thought, poke holes in the concept and put mouth.

PS: As I give this more thought and get feedback from real experts, I may post updates.